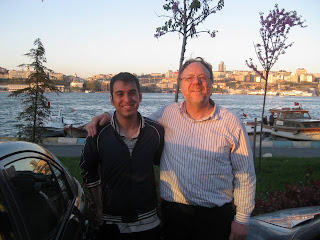 Imran and yrs truly in Istanbul. Behind us: the Golden Horn, former home of the Ottoman Navy.

Something doesn’t fit anymore. If this is the post 9/11 world Israel wanted, must they have lost their friggin’ minds? Turkey wants them dead. Saudi Arabia is, after years of silence, threatening the US over a potential veto of Palestinian statehood. Israel’s ambassador to Egypt, not so long ago, welcomed to Cairo like a hero, has fled the country. Libya’s oil cash will now be flowing into groups opposed to Israel, instead of the other way around. Israel hates Obama but the GOP, drowning in Israeli cash, has fielded with most moronic presidential candidates in history. Talk about being set up.

Israel's biggest post-9/11 loss may turn out to be Turkey's transformation from a secular-fascist friend of Zionism, to an Islamic-democratic enemy of Zionism. (The geniuses who decided to slaughter a bunch of unarmed activists on the Mavi Marmara, and then refuse to apologize, get much of the credit for that.)

Turkey is well-positioned to be a key power of the upcoming century. With its double-digit economic growth, land surface bigger than any European country, critically-important geo-strategic location, improving education and infrastructure, consistent movement toward the two ideological attractors of our age (democracy and Islam), and claim to primacy in the vast Turkic-speaking hinterland stretching from Europe to China, reports of the Ottoman Empire's death may turn out to have been greatly exaggerated.

My reports from Turkey:

The View from Turkey: USA Is Bizarro World